Planning on spending your honeymoon in Europe? One of the best options out there is Rome. Italy’s capital city has museums, romantic cobbled streets, outstanding monuments and world-class cuisine, making it an amazing first destination for newlyweds.

Visiting Rome is a true journey into the past. With its amazing ruins, magnificent monuments, historical heritage, and unique charisma, it’s not hard to see why it’s one of the most visited places in the world.

Also known as the Eternal City, Rome is the largest city in Italy and it’s famous for being the center of power of the ancient Roman Empire. With nearly 2,800 years of history Rome’s historic center is a UNESCO World Heritage Site and is home to several iconic monuments such as the Colosseum, Roman Forum, Pantheon, monumental basilicas, and the Fontana di Trevi.

With its rich artistic history and world-class museum, Rome is also a great destination for art lovers. It’s said to be the city with the most monuments in the world, and has numerous sculptures, paintings, and statues all over the city.

Temperatures in Rome can be as high as 100ºF in summer and as low as 40ºF in winter so you should pack the right clothes depending on the season. If you go from May to October, and especially between June and August, you’ll need good walking shoes or sandals, shorts, t-shirts, a hat and sunscreen.

In Rome there are countless churches and you’ll hear that the most strict ones won’t let you in if you’re wearing shorts. It’s worth noting that it’s not exactly like that. As long as they cover your knees, you can wear shorts without any problem.

Another thing to keep in mind are the shoulders: you must cover them when visiting religious sites. A good idea is to take a light scarf to cover your shoulders so you don’t have to buy the ones they sell in the main basilicas.

Religious sites have their own dress code so keep that in mind and dress accordingly following the previous tips. 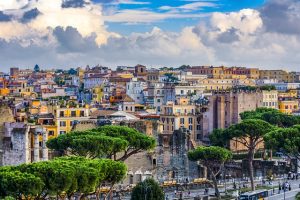 Spend 8 nights at the St. Regis Rome where honeymooners can expect style, class and sophistication. This property is decorated and sculpted in the classical fashion and will leave guests awestruck. With wonderful amenities, and plenty of privacy honeymooners will instantly relax once they’re on property. 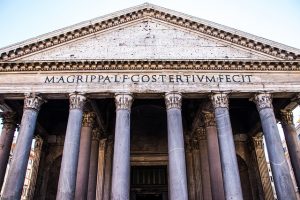 Spend 8 nights at the Westin Excelsior, Rome. This property is close to all of the beautiful attractions that Rome has to offer and also ensures that honeymooners are pampered, given privacy and make sure to have the most romantic honeymoon. Their onsite restaurant has rave reviews and their spa is top notch as well 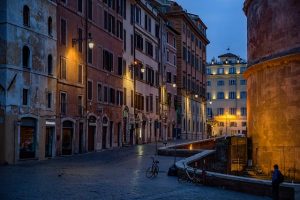 Spend 10 days on a cruise exploring the best parts of Italy including Rome, Porto Torres, Livorno,  Civitavecchia,and many more. Honeymooners can expect a spacious cruise ship, social spaces like bars, restaurants and lounges, and exciting off shore excursions. This honeymoon is full of luxury and adventure.

When to visit Rome on your honeymoon

With mild winters and hot summers, Rome can be visited the year round. Even though temperatures in summer range from 85ºF to 90ºF, tourists flock there from June to August.

During April, May, September, and October temperatures are usually mild and the city isn’t so busy making them the best months to visit Rome.

If you want fewer crowds, even cheaper rates and you don’t mind wearing a coat, November, January and February are also good options. Keep in mind that during this period most attractions have shorter winter hours.

How long to stay in Rome

With its rich history, numerous monuments, mild weather and delicious food, you could easily stay in Rome for weeks. If you have a limited time, however, it’s important to be smart and make the most of your holidays.

If you just want to visit the main sites on your honeymoon such as the Colosseum, Roman Forum, Pantheon, the Fontana di Trevi and the Vatican, you could squeeze everything in 3 or 4 days. Most people like to leave the city to enjoy other towns in Italy, which we highly recommend. You can easily spend 2-3 weeks exploring Italy.

Rome is the 3rd most visited city in Europe so it offers a wide variety of accommodation for every budget. Having so many options to choose from can be overwhelming so here we have narrowed down the list to 4 to make your life easier.

This is a 4-star hotel located only 300 meters from Termini Station so it’s very well connected to the rest of the city. A walk to Piazza Barberini takes around 15 minutes, while the Colosseum, Piazza Venezia and the Pantheon are 30 minutes away.

With rates starting at $120, Hotel Diocleziano offers elegant and modern rooms with air conditioning, TV, WiFi and free non-alcoholic drinks. The hotel also offers a buffet breakfast and a bar.

St Regis Rome is an exclusive 5-star hotel located 10 minutes away from Tremini Station and 15 minutes from the Trevi Fountain.

This hotel features 138 rooms and 23 luxurious suites with air conditioning, TV and minibar. It also has a restaurant and bar that serves breakfast, lunch and dinner, a health club and spa, and 10 event rooms for business celebrations and meetings.

A night in this exclusive hotel costs a minimum of $600 per night.

The Hotel Locarno is a five-star Art Nouveau style hotel located in the historic centre of Rome that has been open since 1925.

Located in a popular shopping area, only 2 minutes from Piazza del Popolo square and steps away from the Tiber river, this 44-room hotel features a rooftop terrace with great views to the city. Additionally, it offers free bikes and free breakfast.

Even though it’s not the cheapest place in town, for $300 per night, Hotel Locarno is a great option for those who want luxury and a more private experience.

Set in a 19th-century private villa, Hotel San Anselmo is a 4-star hotel that overlooks the Sant’Anselmo square and S. Anselmo church.

This hotel is located in the south of the city in the Aventine area which offers a quieter atmosphere. With air-conditioning, free breakfast, minibar, free WiFi and TV,  a night here starts at $100.

Things to do in Rome

With its numerous attractions, it’s easy to see why Rome is one of the most visited cities in the world.

To visit the ancient part of town, you’ll have to walk the Via dei Fori Imperiali, which stretches for 0.6 miles and connects the Colosseum and the Venezia square.

We’ve already mentioned some of the must-sees in Rome such as the famous Colosseum, the Pantheon, Roman Forum, and the romantic Trevi Fountain. However the list goes on and includes some beautiful squares such as Piazza Barberini or Piazza del Popolo, Basilica of San Clemente and Basilica di Santa Maria Maggiore, and the monumental Spanish Steps.

Enclaved within Rome is the Vatican City, the smallest nation in the world. Despite its size, Vatican City is home to some of the most famous religious and cultural paintings and sites such as St. Peter’s Basilica, Michelangelo’s Sistine Chapel and the Vatican Museum.

Finally, a visit to Italy wouldn’t be complete without tasting its delicious cuisine. When in Rome, do as the Romans do and try gelato, pizza and pasta in any of the numerous restaurants in the city.

Nearby destinations to add to your honeymoon itinerary

Apart from its numerous sites, Rome is an excellent base to explore other places in Italy.

A short 1-hour train ride will take you to the home of the Margherita pizza.. Although Naples may not be known as the most beautiful city in Italy it has a unique charm that’s definitely worth experiencing. A trip to Naples can be combined with a visit to the ruins of Pompeii.

One of the best options to escape the hustle of a big city like Rome is Tuscany. And the best part is that it’s only 1.5 hours away by train.

This area is considered the most fascinating in Italy for many locals. It offers beautiful landscapes and some of the best wine in the world. What else can you ask for?

I couldn’t imagine a trip to Italy without seeing The David in Florence or going to one of the small towns in the countryside link San Gimignano.

If you have more time, other places worth visiting are the Amalfi Coast -a UNESCO World Heritage Site, famous for its mountains, blue waters and cute towns-,  the beautiful area of Cinque Terre, and the unique canals of Venice.

To sum up, Rome has plenty to offer and is sure to transport you back to ancient times. If you have the chance, add at least a week time to your initial holiday plan because the Eternal City and its dolce vita will leave you wanting to explore more of Italy during your honeymoon.