Thank you, Discovery Cove, for providing us admission to the resort for the day. While our tickets were complimentary, these are our authentic thoughts about our day.

Discovery Cove is an Orlando day resort owned by SeaWorld. You can snorkel with stingrays, swim with dolphins, and explore the aviary on your way around the lazy river.

Our Day At Discovery Cove

We arrived at Discovery Cove right around 7:30am, and it got busy immediately after we showed up. We recommend getting here as early as you can to avoid lines and to take advantage of the full day. They checked our bags, checked us in, assigned us a time for a dolphin swim, and escorted us to breakfast. After breakfast, we got in our gear to snorkel.

Before you get in the water, the crew provides you with the option of a wetsuit or a vest. Since it was a bit chilly for swimming (it was 77 when we arrived, 80 by the afternoon) we both opted for the wetsuit to go snorkeling and changed into a vest later in the day when it warmed up (much easier for bathroom trips). They also provided the snorkeling gear.

There are so many beautiful fish and tons of huge stingrays! We had a great time exploring and following the sea creatures around. While snorkeling, there’s an adjacent tank filled with sharks, which you can see through the glass under water. You can also pay extra to swim with the sharks, but just snorkeling on the other side of the glass as them was enough for us.

Swimming with Dolphins in Orlando 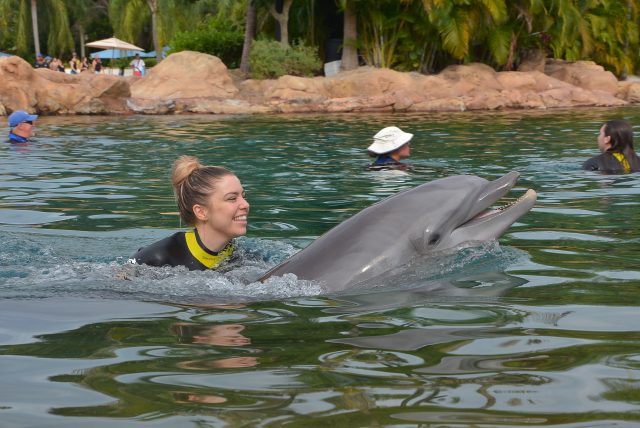 When you book your stay you have the option of adding a dolphin swim. Then when you arrive for the day, you are assigned a time. We were assigned 9:30am.

A bit before our start time, we met at a designated cabana to watch a training video. The training video was less of a training video and more epic shots of dolphins set to a woman wailing high 80s rocker notes. We giggled through it, but we did learn a bit more about dolphins, how impressive they are and how we should respect them. 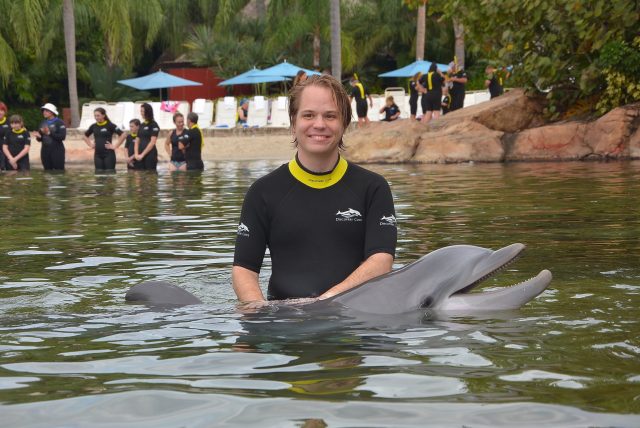 We followed our crew to the dolphin bay and got to meet our first dolphin, a young 2-year old named Sky who was born at Discovery Cove and was still learning some tricks. We got to touch her, feed her, have her make noises and movements, and learn more about her. Next, we met an older dolphin, whom we got to kiss (photo op!) and make do some tricks. Last we got to take a ride with the dolphin. At one point, one of the other dolphins did some tricks in the air. That was Sky’s mom, a retired dolphin from SeaWorld San Antonio. It was an amazing experience to have and a completely unique thing to do in the heart of Orlando.

Since you’re not able to take your own photos of the dolphin experience, the resort takes them for you. They are not cheap, but it really is a great experience so I can definitely see paying for a few of the photos. 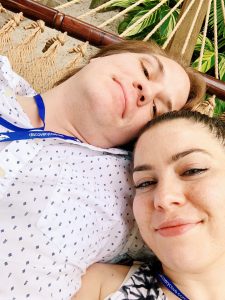 At an additional cost, you can rent a private cabana. We got a great cabana overlooking the dolphin bay. Richard, our cabana attendant for the day, stopped by about once an hour to check and see if we needed anything. The cabana was fully stocked with drinks, snacks, and towels, and had chairs and a lock box for our stuff, so we really didn’t need much of anything. Later in the afternoon, he did bring us an extra hot chocolate which was awesome. We didn’t spend a ton of time in the cabana, but we did take a nap together in the hammock for a while, and when it rained we had a great place to find refuge.

If you don’t have a cabana, there are lockers and plenty of chairs to lay stuff on. It was nice to have a private place to relax in the afternoon.

Other Attractions at Discovery Cove 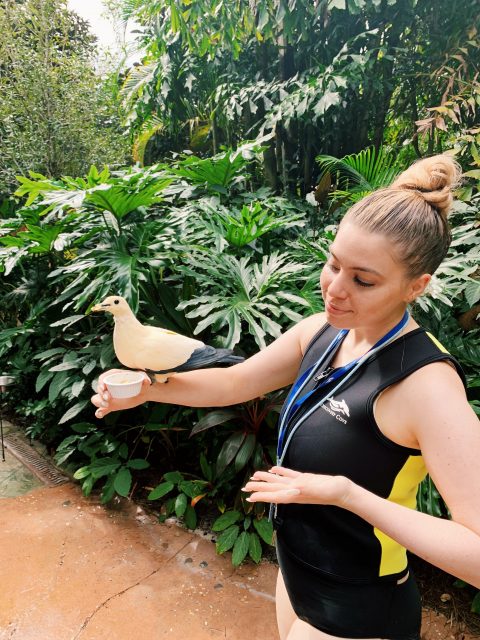 The aviary was pretty fun, we saw some beautiful birds and got to feed them. We went around 10:30. The birds were not too active and weren’t too interested in our food. Other guests said they are more active earlier in the morning.

There is also a lazy river that goes inside caves and around some beautiful greenery and birds. If you enter at one of the beaches, you can find floaties to carry you around which are essential for a relaxing time. We made the mistake of getting in without them and had a bit of a workout. When we finally got floaties, the lazy river was lovely. There’s also a shallow area where you can sit in chairs and enjoy snacks and drinks.

Food at Discovery Cove is all-included which can be really fun, but we have to be honest – the meals were not great. 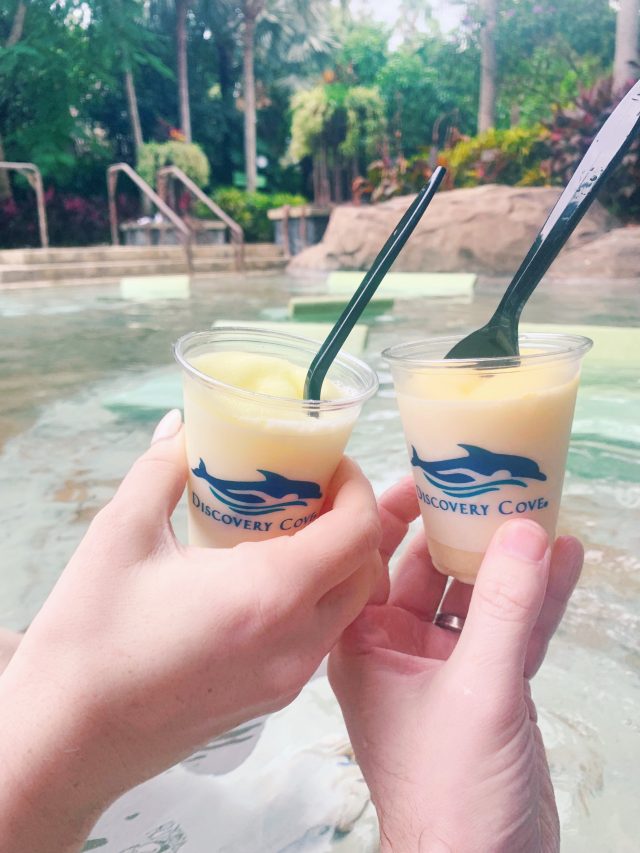 The highlights were the snacks. Unlimited warm pretzels, Rice Krispie treats, and chips were great. There was also unlimited slushies, soda and hot chocolate (so delicious when it started raining! We don’t drink alcohol but can imagine if you do the unlimited beer and wine would be a highlight as well. 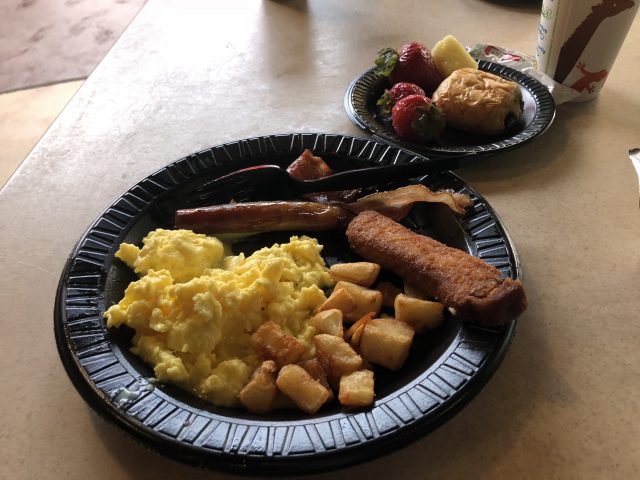 Breakfast and Lunch were pretty mediocre (sorry Discovery Cove, we still love you), similar to the quality of a Golden Corral. The fresh fruit at breakfast and lunch was ripe and delicious. The breakfast had a lot of options, the sausage and fruit were pretty good, but the eggs were very runny and unappetizing. At lunch, the steak and salmon had good flavor but were very well done. The carrot cake and cheesecake were fine, but neither was good enough to finish. The vegetables were mushy.

In sum: you won’t go to Discovery Cove for the food, but it’s great that it is all-included. Unlimited snacks and drinks are always fun and you wont be hungry while you are there.

Is Discovery Cove Worth The Price?

A day at Discovery Cove starts at $159, with additional cost for experiences and a cabana if you want one. You can keep an eye out for deals that include the dolphin swim with the cost of admission. I honestly things this is worth the price since it is such a great experience. When you take into account everything that’s included at Discovery cove and compare it to other parks in the Orlando area, it is a similar price. Admission becomes a great value when you look at getting a package deal that includes admission to other SeaWorld parks in the area.

Overall, we really enjoyed our time relaxing and exploring at Discovery Cove and found it to be a welcome break from the craziness of the other theme parks we went to during our time in Orlando.

Should you go to Discovery Cove if it is going to rain?

Discovery Cove has a policy where you can adjust the date of your reservation within a few days. We had a limited time in Orlando and didn’t have much flexibility on when we went, so we kept our plans even though the forecast projected rain.

A week out, our forecast said thunderstorms all day. The night before and the morning of, it said there was an 80% chance of thunderstorms starting around 11. We decided to arrive early to get in as much action as we could before 11. The morning of, the forecast changed to be only a 30% chance of rain from 4-5pm. In reality, it was dry most of the day, and did thunder and rain a bit around 4 pm. For those few minutes, the rain came down hard. But it was fun! All that to say, the weather forecast is constantly changing in Orlando.

The rain didn’t bother us since we were already wet, and the pool water is heated (more or less, depending on which pool you’re in). Plus, we had a cabana to hide out in for a while when the rain was coming down hard, which was such a fun flashback to our honeymoon in Costa Rica. Many people stayed in the water through the rain and only had to get out when it started thundering. Altogether, I’m glad we didn’t let the rain ruin our visit!

The rain in Florida is unpredictable. Stay safe, but don’t let a little rain scare you away.

So happy to read this! We are going next week and still several days out it’s saying rain all day and I’m hoping it isn’t that way and high in the 70s. Of course this week it’s 80-90. So hopefully all works out. I’m so glad to read your post and hear what to expect too!

Glad we could help. I just looked at the forecast for next week and I would try not to worry about it too much. It will most likely change and even if it did stay the same, it won't be raining all day so you should be fine. Plus, assuming you are going to other parks, the rain showers keep the worst crowds away.